Every June, GO compiles a select list of talented tastemakers, influencers and all-around inspirational women who are making their mark on the LGBT community and on the world at large. Judy Gold is one of the hardest-working women in show business, and one of the most recognizable out comics on the planet. Most people know her from her stand-up specials (on HBO, Comedy Central and LOGO) or her off-Broadway shows (“The Judy Show – My Life as a Sitcom,” “25 Questions for a Jewish Mother”). 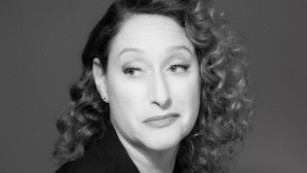 Judy Gold
Stephen Colbert is an amazing entertainer. He’s consistently funny, has impeccable timing, conducts flawless interviews and has a very clear point of view.
I don’t know a comic or writer in the industry who doesn’t recognize his unique brilliance. I, for one, am very grateful that he has a late night show, and not only because I was a recent guest on his couch — well, chair.

Comedian Judy Gold appears in episode three of “I’m Dying Up Here,” the Jim Carrey-produced Showtime ensemble series premiering Sunday that fictionalizes the infamous early 1970s Los Angeles comedy scene, where a slew of real-life icons like David Letterman, Jay Leno, Andy Kaufman, Richard Pryor, Robin Williams, Billy Crystal and Elayne Boosler first rose to prominence and thousands of other young hopefuls followed suit on the heels of Johnny Carson’s decision to move “The Tonight Show” to the West Coast in 1972. On the new show, Gold plays an aging comic named Judy Elder, who’s vying for a second shot at stardom on the stage of her childhood friend Goldie Herschlag—the tough-as-nails owner of an L.A. comedy club that bears a striking resemblance to The Comedy Store and its real-life proprietor Mitzi Shore.

A new holiday tradition is born when Broadway Sings The Muppet Christmas Carol takes to the stage. NJPAC is happy to present a concert version of the music, the magic and the holiday cheer of the Muppets’ memorable rendition of the Dickens tale on Saturday, December 3, at New Jersey Performing Arts Center.

Crisis in Six Scenes is creaky and dated, but three women—Elaine May, Judy Gold, and the erstwhile Hannah Montana—distinguish themselves anyway.